No Job Too Complex

Delta Scientific has performed more than fifty crash tests working with a number of government agencies and crash test facilities, since its inception in 1974.

The data collected over these crash tests has allowed our engineering team to have an intimate understanding of what is needed to stop the force of a full scale vehicle impact. Our robust engineering team is a vital element that sets Delta Scientific apart from our competitors. Our engineers are accustomed to adapting barrier systems to meet real world challenges. Delta Scientific engineers are located here at our manufacturing headquarters in Southern California and they are a part of every barrier project from putting together submittal packages, to offering customer support for barriers that have operated in the field for decades.

Our electrical engineering team is well versed in custom barrier logic. Touch screen and traditional control panels are designed and build specific to each application and our electrical engineers work with the customer from the beginning of the manufacturing process. The Delta Scientific electrical team can adapt barrier power units to meet the demands of extreme climates. Our battery backup systems and built in barrier fail-safes protect barriers against unstable power supply in remote locations around the world. Delta mechanical engineers work with architects, installers, and end users to ensure the barrier systems are going to perform as needed. We are available to discuss solutions to any unique barrier challenge. 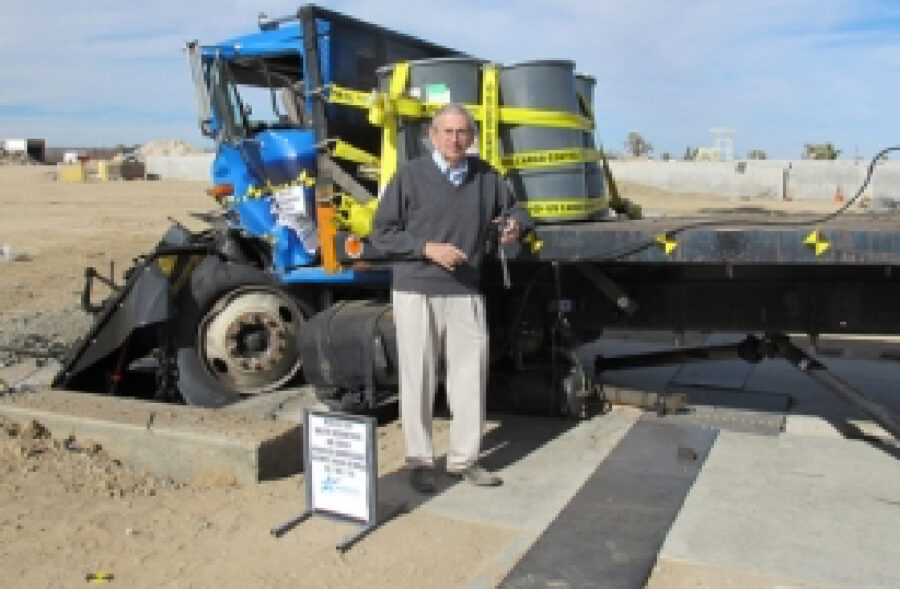 The HD2055 electromechanically controlled anti-terrorist barricade decisively stops 15,000 pound (6,803 kg) vehicles traveling at 51 (82 kph) in a recent crash test conducted by an independent testing laboratory. The HD2055 barricades not only stopped the vehicle but contained the test load representing the bombs strapped to the truck bed. The crash test result showed a less than zero penetration.
Learn More

The DSC1000 is a self-contained unit that is stored and towed on its own trailer. Municipalities, event organizers and others that stage temporary events, ranging from farmers’ markets to concerts and sporting events, need a commercial barrier that can be towed into place to protect attendees as well as an errant driver.
Learn More 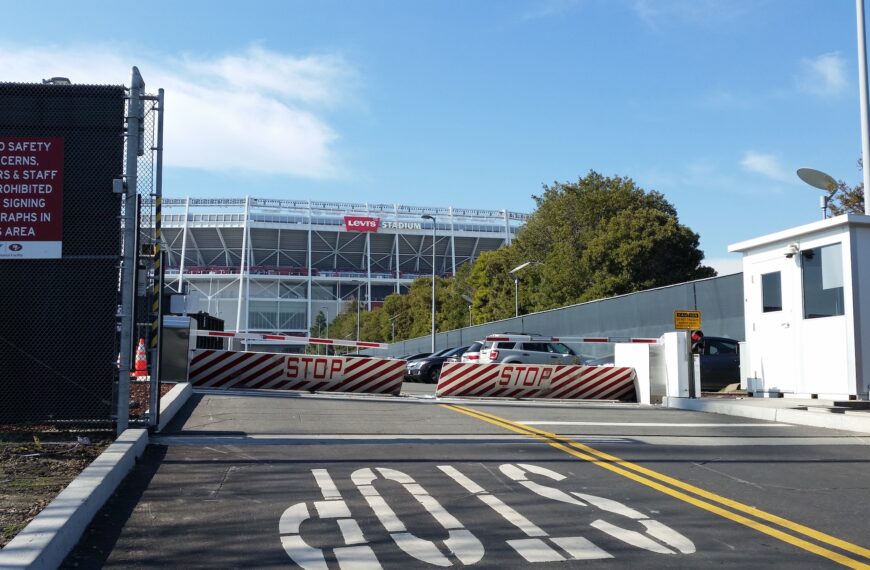 This quick installation surface mounted barrier has a single buttress that houses all the necessary components to run the unit. Simply bring in power to the buttress side of the barrier and run your control wire to your desired location and you are ready to go. This barrier can be left handed and right handed to cover larger openings or orient the barrier as needed for power.
Learn More

Able to be deployed or relocated for full manual or automatic operation within two hours, Delta Scientific’s quick deployment Series IP500 K-4 Crash Rated Barricade will stop and destroy a 15,000 pound (6,800 kg) truck traveling at 30 mph (48 km/h) in less than 20 feet (6 m). It secures an entrance roadway 8 to15 feet in width from vehicle attack.
Learn More 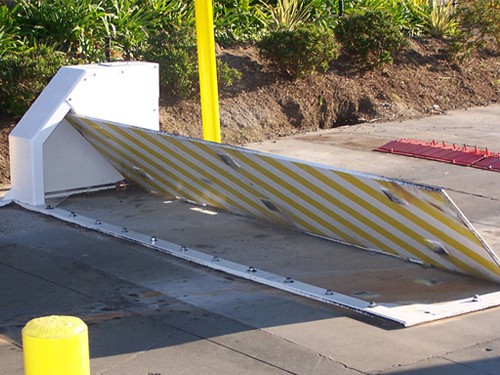 The TW2015 Hydraulic Wedge Barricade System is a one-inch thick ramp that features quick installation. It is designed to install at difficult locations such as parking structure ramps or areas with sub-surface drainage problems and used for intermediate security applications.
Learn More

The MP5000 is designed as a towable, rapid deployment vehicle barriers. Installation and setup can be achieved in less than 30 minutes. The MP5000 is available with clear openings of 12’, 16’, and 20’ and carry crash ratings up to M40/K8. Simply plug in standard 120v power to the battery operated HPU and you are ready to run. Don’t fret if no power is available as these units can run strictly off the optional solar panel if necessary.
Learn More 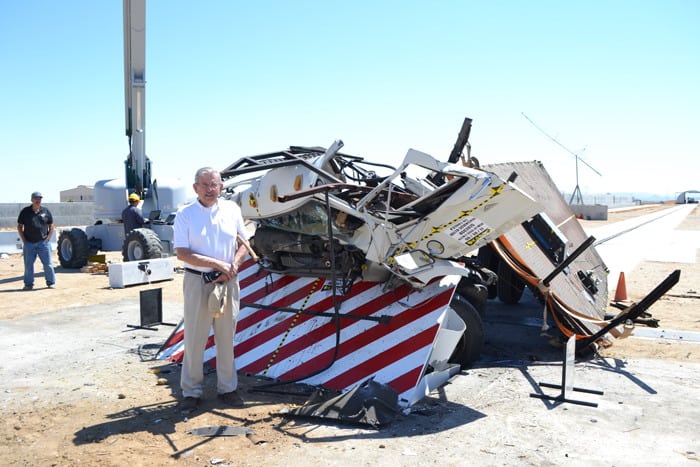 The new Embassy barricade is a fully enclosed, shallow foundation wedge barricade with a covered front and sides. In a full scale crash test conducted by an independent test lab, the DSC207s met the criteria for an M50/K12 rating.
Learn More 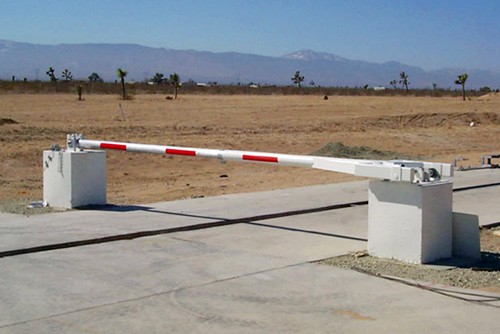 The TT212 Beam Barricade is used at government facilities, embassies and automotive sales facilities. When CarMax, the Auto Superstore® and the nation’s leading specialty retailer of used cars, needed a low maintenance system that would deter theft from their lots and integrate with their present security system, they chose Delta Scientific’s beam barricades.
Learn More 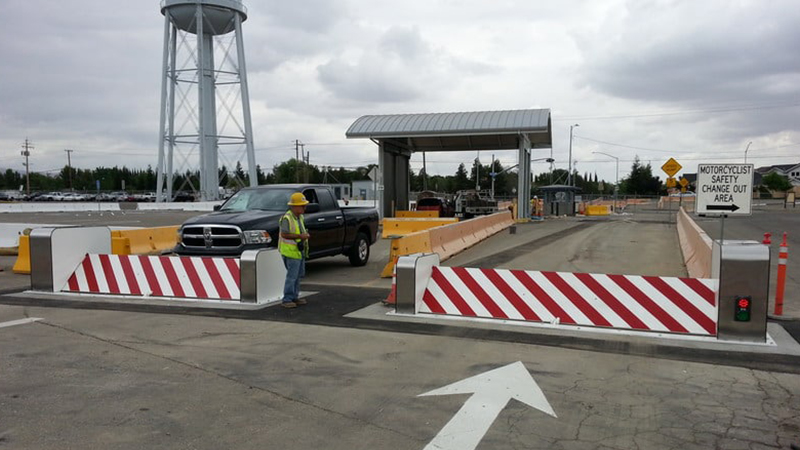 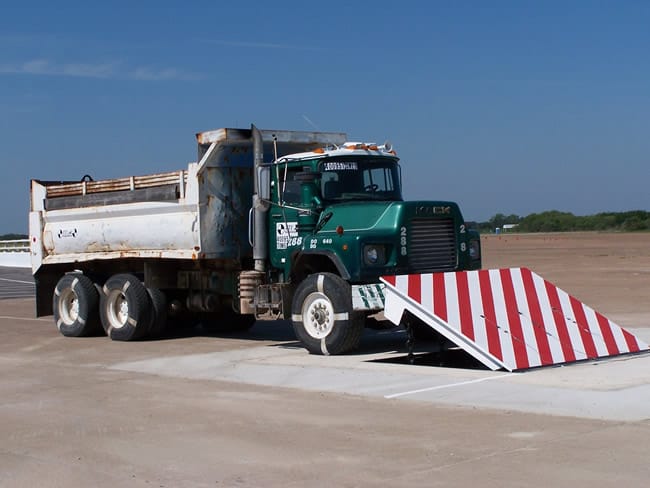 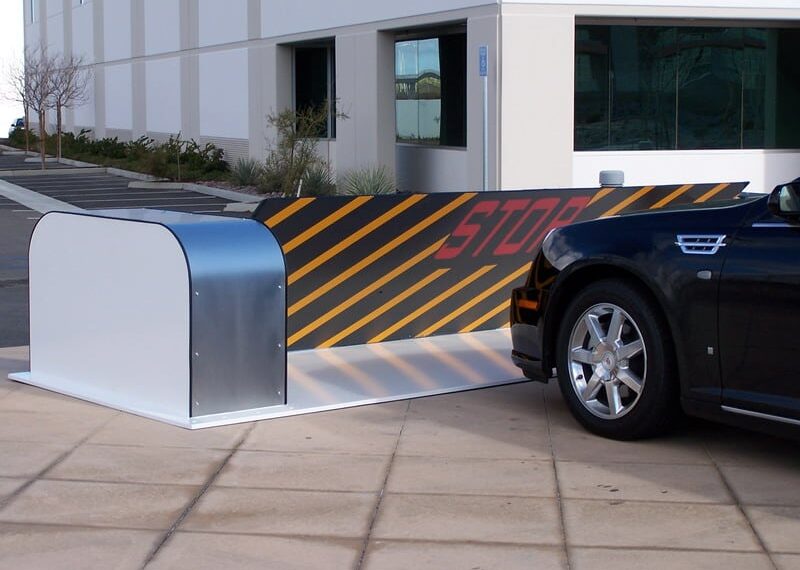 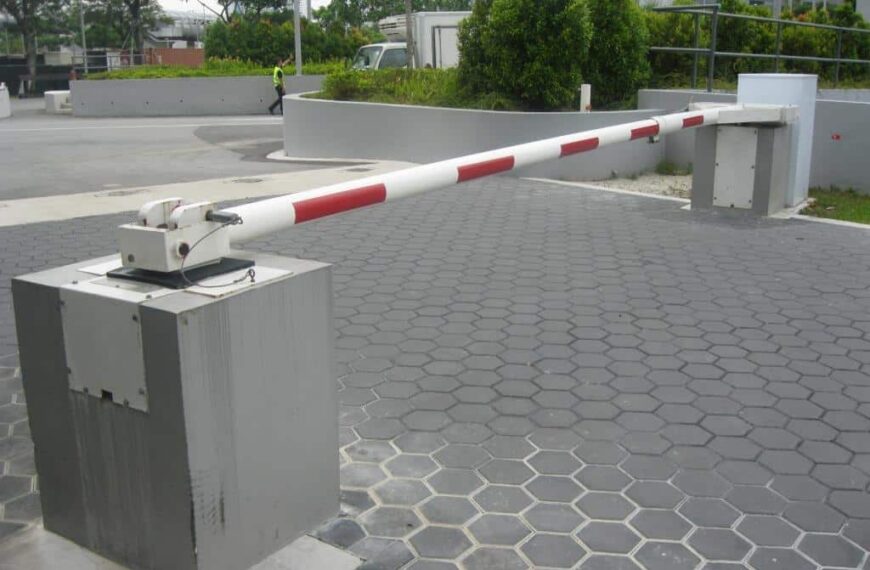 It has been certified by the U.S. Department of State to stop a 15,000 pound vehicle in less than 20 feet. Actual penetration is 5 feet. Both hydraulic and manual versions are available. Patents are pending.
Learn More 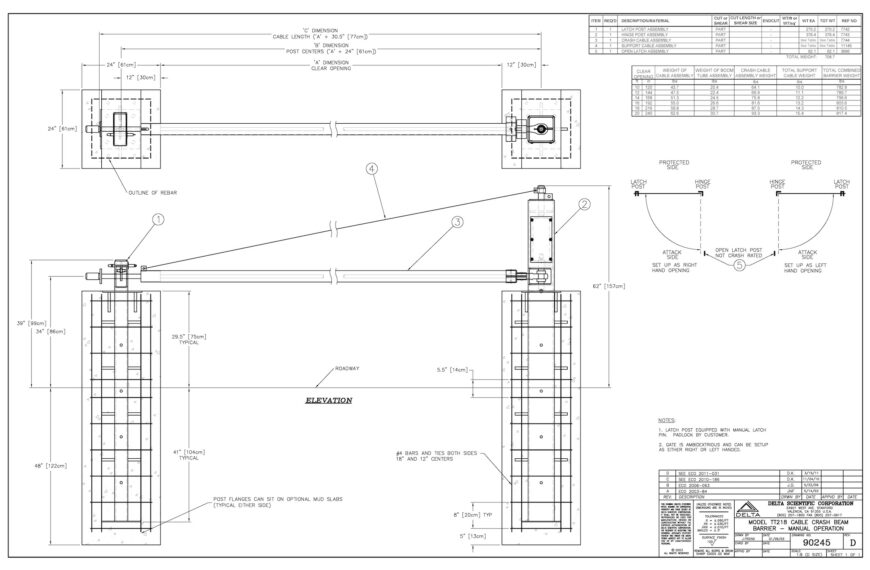 The TT218 Beam Barricade Swing Gate is used at locations where vertical lifts are impractical. It provides clear opening ranges from 10.5 to 24 feet (3,200 mm to 7,315 mm.) Operation is manual.
Learn More 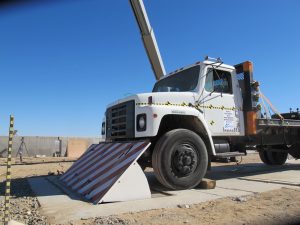 The breakthrough HD200, was built for high traffic locations requiring rapid emergency fast operation (EFO) rates and open/close cycles. With a 0.63 second EFO and a 2-5 second normal operation rate, the HD200 is the fastest operating standard vehicle barrier in the market.
Learn More 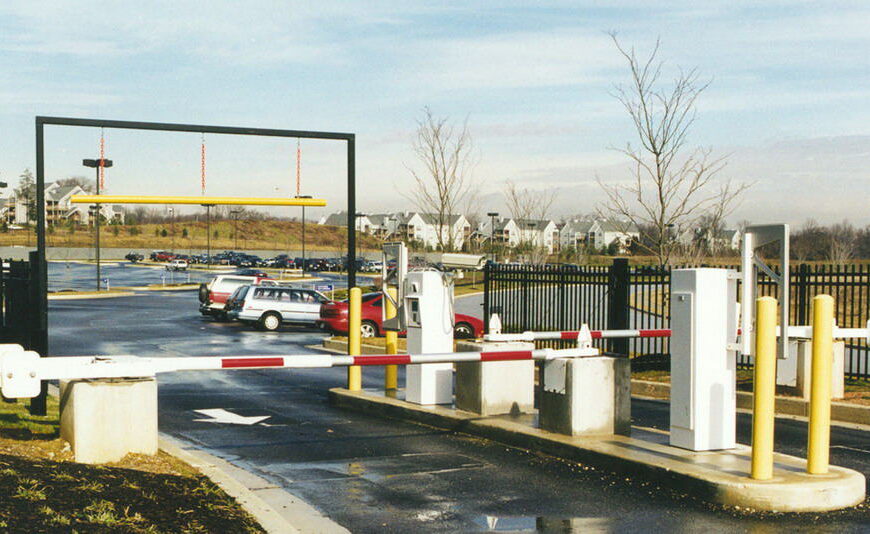 The high-strength wire rope of the TT212 will stop a non-armored or non-tracked vehicle weighing 6,000 pounds at 40 mph (26,7 KN at 64 kph). The TT212 Beam Barricade is used at government facilities, embassies and automotive sales facilities.
Learn More 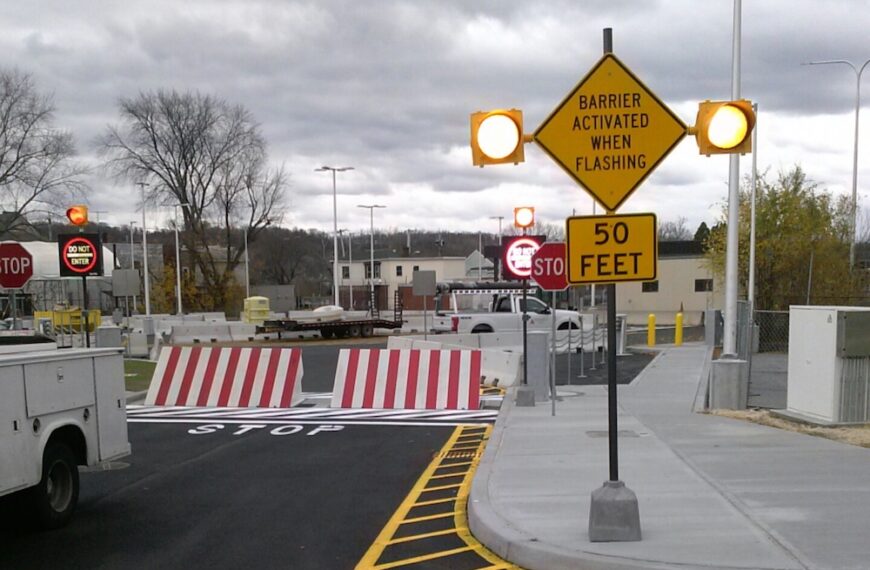 HD300 Wedge Barricade – M50/P1 rated Barrier with a 24” shallow foundation design. Available with a fully electric or hydraulic control system. The HD300 has a fully enclosed face with an Emergency Fast Operation of 1.5 seconds or less.
Learn More 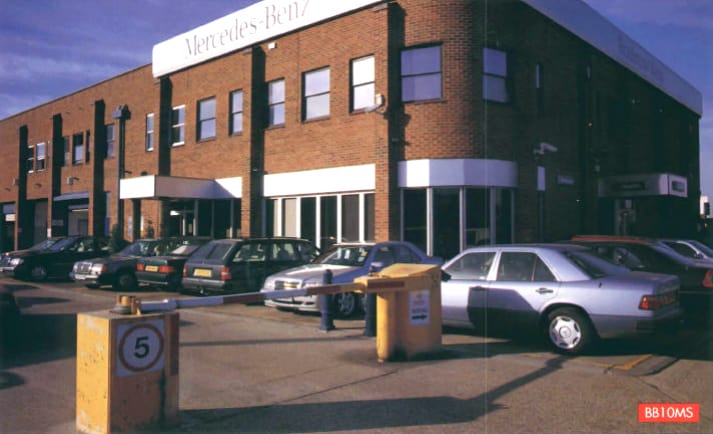 BB10MS Hydraulic Beam Barricade features an integral hydraulic pumping unit with bolt in place cabinet along with a cast in place latch and cable post. The BB10MS is crash rated.
Learn More 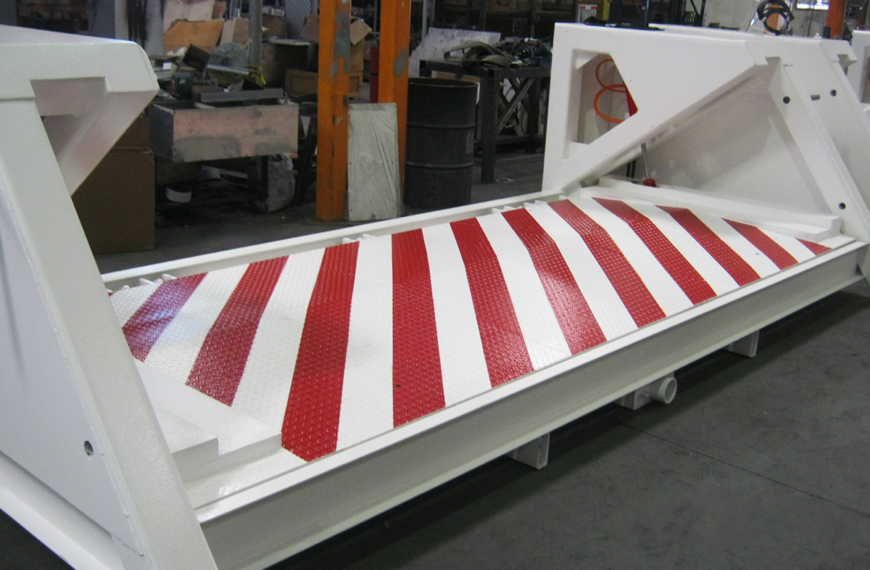 The TT207SFM is a K12 rated barricade 15,000 pound truck at 50 mph. It comes in two versions, surface mounted for parking ramps and with the standard 13 inch foundation. This high security barricade is also available with a debris screen. When the K-12 barricade is in the up position, the hydraulics are protected by the heavy metal ramp plate. Widths available: 12 foot to 24 foot clear opening.
Learn More 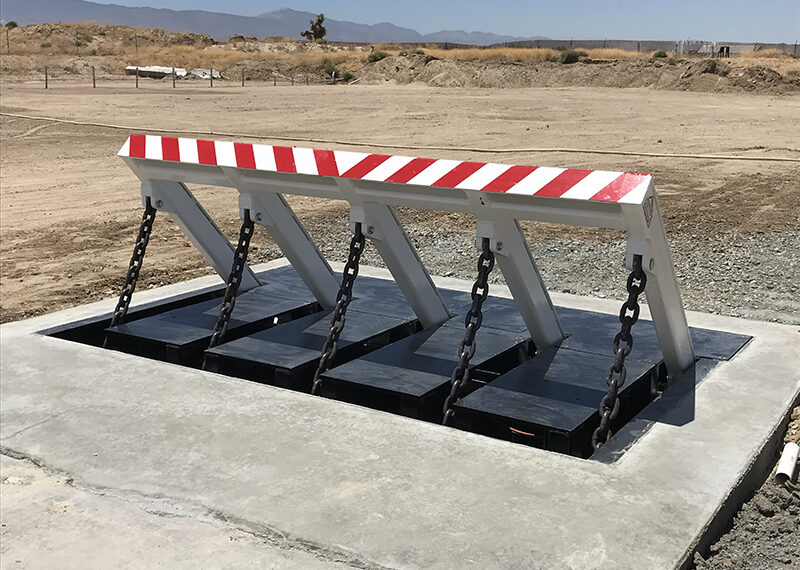 The new Delta DSC550 open frame barricade marks the latest accomplishment from Delta Scientific Corporation. The DSC550’s shallow 24” foundation is ideal for applications where underground utilities, buried pipes and other obstructions may present a challenge. The open frame format provides a unique counter-balance design with no springs or other mechanical assists that need extra maintenance.
Learn More 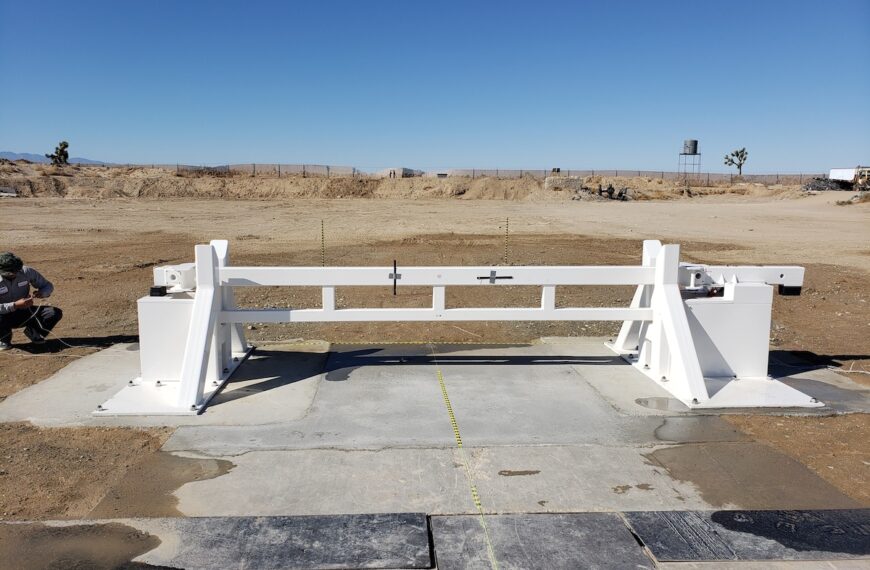 Raising in only five seconds and lowering in merely two seconds yields a fast cycle rate of over 100 vehicles in and out per hour, making the DSC7090 ideal for higher traffic and population locations. The DSC7090 is used when wide roadways need to be secured from attacking vehicles and in larger parking areas where security systems are needed to deter theft.
Learn More 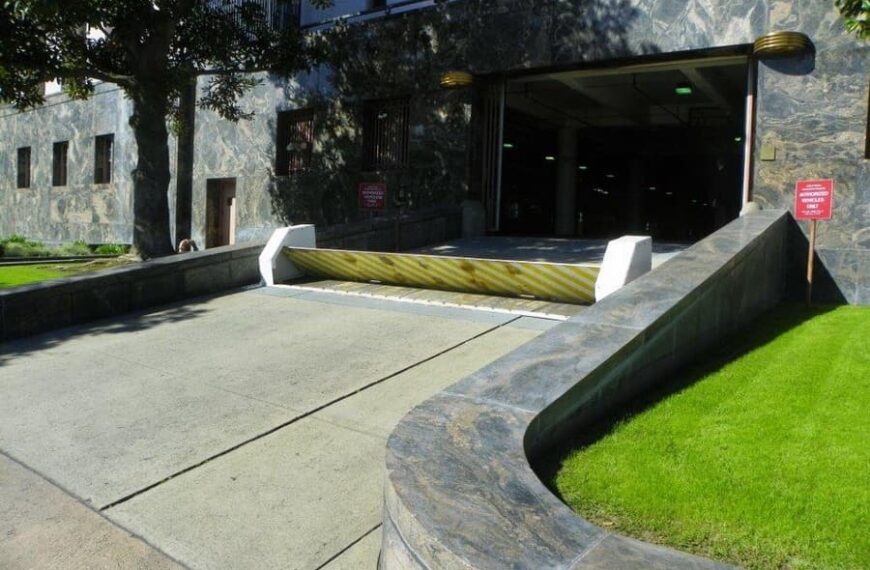 The DSC7000 K12crash rated beam barricade is used worldwide at locations where wide roadways need to be secured from attacking vehicles. It provides protection between 12- to 20-foot wide with options to 30 feet (3.7 to 9.2 m). The 725-pound beam of the vertical lift barricade stops a 15,000-pound (66.7 kN) vehicle traveling 50 mph (80 kph) dead in its tracks, equivalent to 1.2-million foot-pounds of kinetic energy.
Learn More 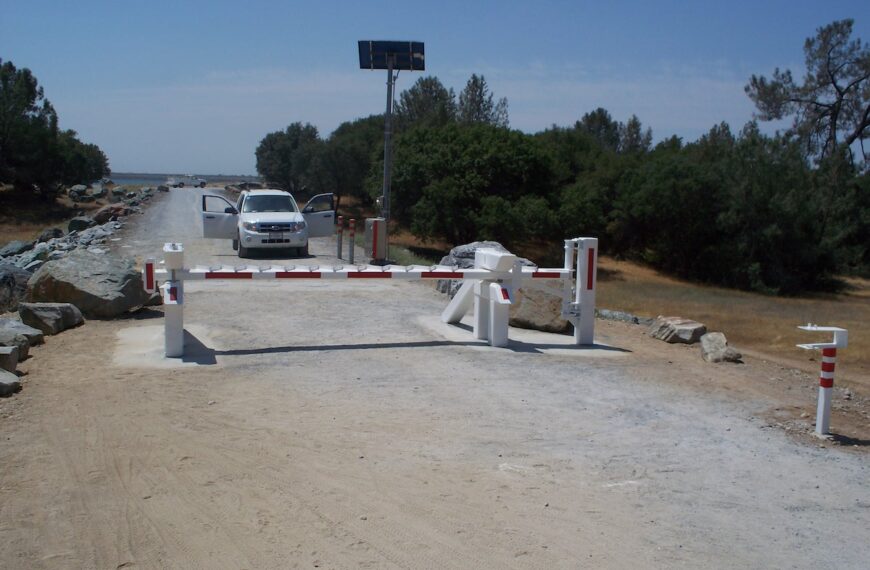 The DSC7500 swing beam barricade is designed to close off one or two lanes of a roadway and provide counter terrorist level protection against vehicle attack. The barricade stops a 15,000-pound (66.7 kN) vehicle traveling 50 mph (80 kph) with zero penetration, equivalent to 1.2-million foot-pounds of kinetic energy.
Learn More

Most people have probably seen bollards before but not known what they were called. Some people refer to them by a more generic term, such as “traffic barriers.” A bollard is a vertical post that is short and sturdy used for security…

Read More Bollards and Their Uses

In the last couple of years, there have been significant online attacks against critical infrastructure in the United States that have led to shortages, price hikes, and other disruptions of everyday life. If bad actors were to launch a physical attack against…